Oh, how lovely it is to go on vacation.  My family thinks I'm always on vacation, but 95% of the vacations I take focus around a race my husband and I are doing or a close friend is doing.  I'm not complaining, because it is time away from the responsibilities of the office and of things around the home.  And they are ALWAYS fun and amazing trips.

This time, though, we went to Cancun, Mexico, and really had a relaxing vacation.  I don't think my husband thinks that training on vacation is really relaxing, but when you're training for something as big as an Ironman, you need to get the training done.   It wasn't as intense as the training I'd been doing up to now in terms of distances, but I still managed to get in three runs, three swims and some weight training in the gym.

The gym.  There's a whole different breed of people that train in a gym.  I should preface this by saying that I don't do a lot of working out in a traditional gym and there's a reason why I don't.  I don't like it.  Plain and simple.  I like working out with people and I find that gyms are a bit too solitary for my liking.

The gym at our resort wasn't very big, but it was certainly a lot bigger than some gyms I've seen at hotels/resorts.   There were five treadmills that were occupied all......the.....time!  My husband and I learned our lesson when we showed up the first time at a not-so-early time because, after all, we were on vacation and I didn't want to get up at six in the morning.   While we didn't go at six in the morning after that, we did show up at seven and had some better success at getting a treadmill without as much delay.

The most amusing part for me is watching the men that do weights.  Two men were actually walking around with their coffee mugs and newspapers and would read/sip in between their sets.  Not being a gym rat, I found this quite entertaining.  Do people actually walk around with their coffee in the mornings at the gym?  I might reconsider training in a gym if I can do that.

The piece de resistance for me was the infinity pool at our resort and the fact that it was HUGE!   Based on my time for two laps, it had to be a 50m pool.   I don't think people were expecting somebody to be doing laps upon laps upon laps in the pool, but I tried to do my swims in the morning when there weren't many people in there.  One day I did it in the afternoon because I ran in the morning.  I think I added extra distance going around all the people.   No matter, it's all training.

So while I did do my training, and relaxing was definitely on the agenda, my husband is, shall we say, bordering on ADHD.  I think he would have snapped if we sat around the pool/beach for the whole time we were away, so we went on an excursion and did some ziplining, swimming and rafting in some caves that were covered in stalactites and drove an "amphibious" vehicle.  Ziplining was definitely a rush, but I made my husband go first.  Shameful of me, but he's heavier so I figured if the cord could hold him, it would definitely hold me.  I should have mentioned that I am deathly afraid of heights so being able to scratch this off my bucket list was exciting for me.   In the photo below is the end of one of the ziplines.  You land right in the water after going through that waterfall.  So much fun! 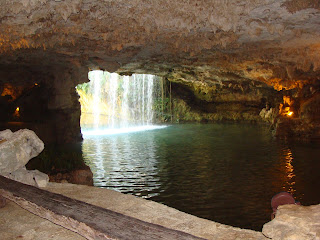 So now it's back to reality and I'm glad I didn't come home to snow!  Thank you, Mother Nature.  Now, if I can only get through my 30K run tomorrow.

"Courage is not the absence of fear, but the conquest of it."
Posted by Mari at 13:13