...but here it is anyway.  My race report for Ironman Lake Placid.

Cole's Notes Version:  It was the hardest race I've ever done, but it was the most fun, most fulfilling and best experience I've ever had.

If you plan to read on for the full report, you may want to grab a coffee/tea/wine/beer -- whatever.  It's a long one.

The first and most important thing for me to say about this race is that I had the BEST support crew -- both at the race and at home.  Other than my husband, four friends came down to cheer me on and support me.   It's trite to say that I couldn't have done it without them.   Starting with my husband who did not complain, even once, at the endless hours away from home life that my training took me.  Weekends?  For any triathlete training for an Ironman, you know that the weekends leading up to a race are consumed with hours on the bike one day and hours on the run the next.  The weekend is shot. Exhaustion is just assumed and expected.

Secondly, my friends.  Well, they are just incredible.   They rode and ran countless hours on the bike and run with me (so did my husband.  He was training for his first sprint tri -- a funny race story in itself).  There were some friends that wanted to travel to Lake Placid, but for many various reasons they couldn't make it.  It ain't easy to fly into Lake Placid for the weekend.  The fact that they even made efforts to get there is just so awesome to me!  So, instead, they sent me numerous emails and Facebook messages to encourage me and keep me motivated.   My two girlfriends that came down (I'm the shorty on the left): 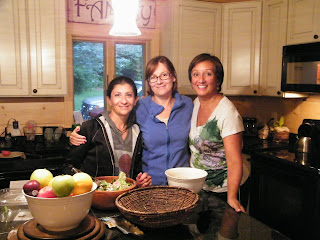 The week before my race, my husband and I travelled to Geneva, NY with a couple of friends.  My girlfriend was doing her first Half Ironman at Musselman (above, on the right) and my husband was doing his first sprint tri.   All I will say about my husband's race at this point is that he acknowledged that he needs to do more swim training.  Thank you, Steve, the 80-something-year-old kayaker for saving my husband's ass.

The only thing missing from my girlfriend's race (held the next day) was the swarm of locusts, that's how bad the conditions were for her on race day.  The skies literally opened up just after she got on the bike and it poured -- with thunder and lightning for good measure.  Don't know how she did it, but she did.  To say that I was proud of her is an understatement.

On to Lake Placid after Geneva's races were done.   We rented a beautiful cottage just on the outskirts of Lake Placid in Wilmington.  I had no desire to be near the mayhem and anxiety-riddled Ironman racers by staying in town.  Besides, I was having my own meltdown after seeing the hills while driving into town.  Thankfully, I found out that I would be riding down those particular hills, not up.    I LOVE riding downhill.  Wheeeeeeeee!!!!!!  (Wussy boys, move out of my way!)

After settling in for a few days and sightseeing around town -- and researching the "Three Bears" of hills -- it was finally time for athlete check in.  The volunteers are amazing and check in was a breeze.  There were still lots of insurance forms and liability waivers to sign -- I thought I did that when I registered?? 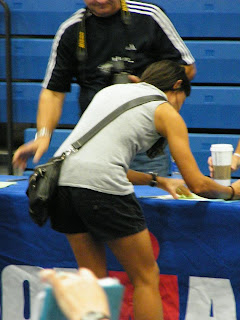 Until race day, I did a little bit of training and relaxing and did a whole lot of nothing really the day before the race, other than taking my bike and gear bags to the race site.  There was a photographer at the entrance to the bike check-in asking all the athletes if we had Ironman tattoos.  I did and he asked if he could take a picture.  I said sure.  Who knows?  Maybe it will end up in the 2012 Ironman race memory book that's coming out at the end of the year.  My husband bought me one!!

My two previous Ironman races, I was a nervous wreck race morning.   Not wanting to have breakfast and gagging through every bite and feeling nauseated right up until I got into the water.

I don't know why, but this year I was amazingly calm.  I kept waiting for the nerves to kick in, but they never did.  Even as we were waiting to get in the water -- my worst discipline -- I never freaked out.

I stayed at the back of the group so that I wouldn't get kicked in the face or body.  The swim is definitely a contact sport!  If you've ever opened the lid of a washing machine while you have a load in, that's what we look like when the gun goes off.

I had a pretty good swim, but not the goal finish I wanted.  I was hoping for a 1:35 but ended up with 1:38.   I'll take it.  Certainly better than the 1:50 at Arizona three years ago.  Worst swim ever and couldn't feel my limbs for another 45 minutes after that debacle.  Sorry, I'll leave Arizona behind and carry on with Lake Placid.

The bike is a bit of a sufferfest.  180K, it's a double loop and the last 16K of each loop is ALL uphill.  It is by far the most beautiful bike route I've ever done and I didn't get delusional enough not to notice how spectacular Lake Placid and the Adirondack mountains are.  I'm sure I gave them a few choice words on the second loop, but forgave them after the race.  I did better than I initially thought I would do on this bike course, but I was secretly hoping for much better.   Had some nutrition/hydration issues on the second loop and needed to stop at a couple of aid stations to make sure I fuelled up.  Rookie mistake.  It was also a very hot day. 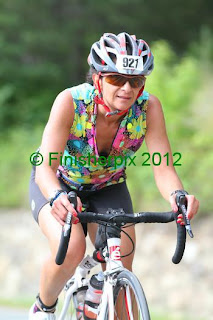 Thank god it's run time.  Generally, this is my best discipline.  I love to run and I've been doing it longer than the other two.  Not that I'm a great runner, but it's my favourite part.  The run was a double loop, too.  I am so freakin' grateful I did endless hilly long runs and did hill repeats on the Around the Bay Valley Inn hill.  This run course had one mother of a hill right in town where everybody cheers for you.  That part is great, but not so much when you're hurting like a mofo and all you want to do is walk up that hill.  Nope.  Those spectators will have none of that.  I am definitely the type of person that gets motivated by people cheering for me.   I would have walked that whole damn hill but for those people that were still out there at 9:00 cheering and yelling and ringing cowbells.  I didn't quite make it the whole way, but 3/4 of the way up was good enough for me at that point in the game.  I was hurting and hurting bad.   I can fake it for a picture, though. 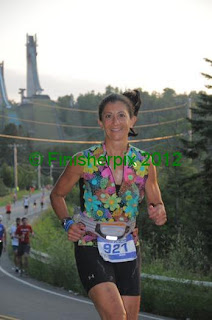 It's amazing how I don't "feel" pain when I'm running down that finish chute to that big banner that says Ironman.  All I'm feeling at that point is the goose bumps all through my body knowing that every single step, every single pedal stroke, every single swim stroke culminated in this finale and that announcement of, "Mari XXXX, you ARE an IRONMAN!"  I've heard it before, but it doesn't get stale. EVER! 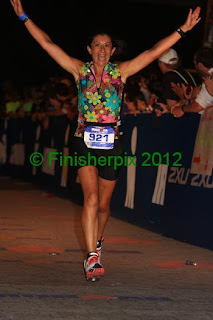 This race meant more to me than any other.  I was the most emotional after this one and so incredibly grateful for my training partners, my friends, my family and most importantly, my husband.  I could barely walk after I crossed the finish line and it took me at least 30-45 minutes to find everyone.  I practically fell into my husband's arms when I found him. 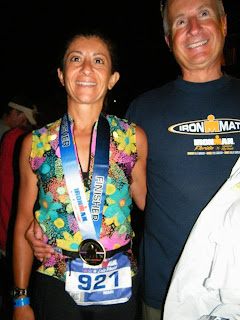 Pizza and beer followed.  My hubby and buddies know how to take care of me :-)