A while back I posted about my motivations and inspirations.  Specifically, I mentioned a couple of friends I would bump into on some of my solo runs.  They are "young" in their 60s and 70s.  The other day, I was lucky enough to bump into them again, so I snagged a photo of them -- minus one.  Dennis is suffering with shingles so couldn't make it out for the run, poor guy. 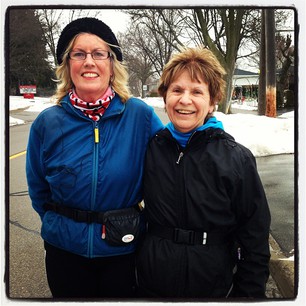 These two ladies are positive, upbeat women who are such great role models.  They represent what leading a healthy lifestyle is all about.  When I told them I was posting this photo on Facebook and on my blog, they were thrilled.  Little do they know there's not much traffic here, but they got more coverage on my Facebook page...lol!  I hope I was able to convey to them what an inspiration they are to me.

The very next day, I was running the Around the Bay route again with my run group and I extended the invitation to my DM friends.  Ten people from the Winston Churchill Running Room joined us.  It would be the first time ever running this route for eight of them.  I learned later, after a celebratory breakfast (lunch), that some of them were freaked out very nervous about it.  If there is one thing I can count on is the support, both mentally and actual, of my group.  We made sure that there were support vehicles at various locations along the route.  I provided maps for everyone, but it's very easy to get lost because there's a lot of twists and turns at the beginning of the route.  No matter how many times we've done this route, there's always someone who goes off course.

It was wonderful to meet so many new runners.  I'm happy that they were able to lay to rest some of their fears about going into this race.  They now know about "the hill" and that it's not as bad as they thought.  Going into a race mentally prepared for it is most of the battle.  They were all pretty exhausted happy runners at the end of it. 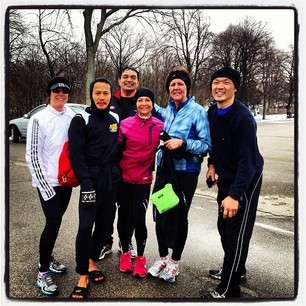 And now, my duties as a pacer will be put to the test this weekend.  Chilly Half, here we come...