I was all set to be a pacer: 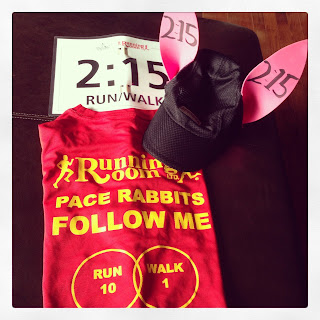 But I was missing a tutu.  Thank goodness for mothers that are seamstresses.  How fortuitous for me that the hubs and I were going to visit my parents the day before the race.  My parents' basement is a veritable Fabricland.   A little zippity-do-da and voila! 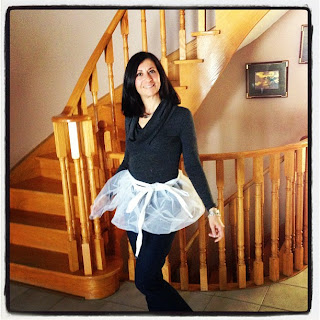 So the race ensemble isn't exactly the most flattering of outfits, but they obviously didn't hire me for my looks: 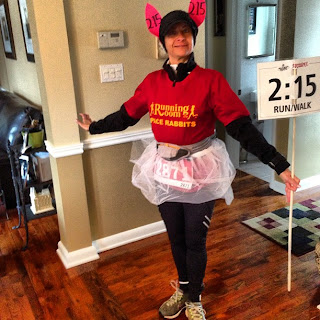 So, on to the actual race.

Being a pacer ain't easy.  There's a bit of stress attached to that responsibility and it didn't really hit me until we started when I couldn't get away from the throngs of people who clearly did not place themselves properly in the starting chute.  The race was pretty congested for the first 5-7K, but we eventually got some clear paths.

I had quite a large group of people that were relying on me to get them to the end of the race with a PB.  I chatted with a few before the start of the race so I knew this was a first time for some, so it would have been a PB  no matter the final result.   I told them all my name and told them to feel free to ask me anything.  Who am I kidding?  I knew that some of them would be hanging on for dear life and wouldn't have the energy, nor the inclination, to chat.  It was my job to do the talking and to encourage and motivate them.

We got ahead of pace a couple of times and I advised them of that and that we would try to slow it down a bit.  This became a bit of a challenge as we continued on.  I forgot to mention earlier that in the week leading up to the race I was requested by the 2:15 pacer doing 10/1's if she could switch with me as I was the continuous pacer.  I agreed since it didn't really matter to me.  I got free entry to the race, I didn't really care.  I don't do 10/1's anymore so trying to pace that way was difficult to stay on top of.  In hindsight, I should have changed my Garmin display so that it showed what average pace was.

In the end, we remained slightly ahead of pace, but I kept checking with my group to see if they were okay.  I still had the majority (if not all) of them still with me.   So I stuck with my plan that I outlined in my earlier post that I would encourage them to pick up the pace if they felt good at the 15K mark and again at the 20K mark.  I  think a few of them left at the 15K point, but I can tell you that I had nobody left with me when I advised them that there was 1K left and that they should dig deep and push it if they had anything left to give.  They took off.

Before coming into the finish chute, I hung back to make sure that there were no runners who had been with me that were struggling behind.   I came across the finish line all alone.  I was not offended.  I had done my job.   My chip time was 2:14:16.   A little quicker than planned, but I don't think anyone who finished faster than anticipated would be complaining.   Hopefully, the slightly quicker pace we were running didn't leave behind any casualties.

After the race while I was going through the finishers' chute, some of the runners I was pacing came up to me and thanked me.  Aw, shucks!  That felt good. 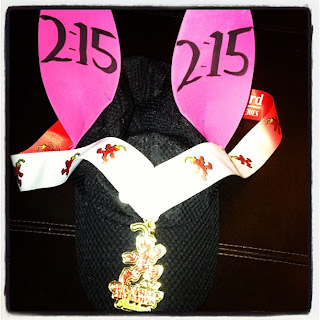