Last things first, I guess.  Since this is the freshest in my mind, I will start with this recap and then work my way backwards.  In my last post, I wrote about my goals for this race.  I had hoped to qualify for Boston, but that didn't happen.  As the days go by, my emotions vary about my results.  I shaved 20 minutes off of my best marathon time, which occurred in Chicago in 2005, so I am very, very happy with my finish time and my overall results: 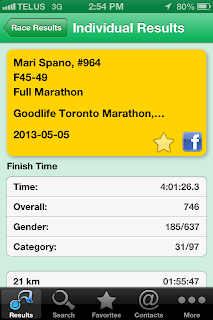 Based on what I'd accomplished this past year and using the Around the Bay as a gauge, I believed I was on track to qualify.  This is where the mixed emotions come in.  I worked REALLY hard this past winter/spring and put a lot of effort into all of my training.  I also trained very differently than I had in the past. I ran six days out of the week when I used to only run three.  This may seem like an extreme jump, but I'm an Ironman triathlete so working out six days a week (sometimes with double or triple workouts in a day) was not a foreign concept.  But I was strictly running and only began to incorporate Moksha yoga into the mix in January (a godsend in retrospect).

In the end, I did not get my Boston qualifying time, but this race is a success and will give me a reference point for my next marathon.  Yes, things are already in the works for the fall to see if I can still squeeze into the 2014 Boston race if I can manage to get this butt to qualify.  As I keep telling my running group as I recover, though:  I am not committing to anything at this point.

On to the race:  We stayed in Toronto at a hotel downtown and had an awesome dinner.  The hubs and I and the girl in the middle (who was running her very first marathon) had one and a half portions of the pasta.  Can you say moo?


As for my experience at Toronto, I again have mixed feelings.    I found the Expo a little disorganized.  Bags were not being provided to carry our race shirts and bibs, so it would have been nice to know ahead of time so that we could have brought our own.

Everything went smoothly the morning of the race and I was ready to go. 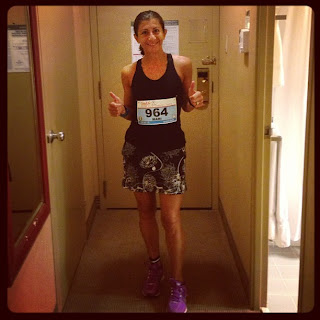 I messed up on the whole shuttle bus thing to the start so we decided to take a limo -- cuz we're cool cats -- to the start.  We had lots of time to chill and use the port-a-potties many times before the gun went off.

There was nobody in my group running my pace so I knew I was going solo on this one again.  We all hugged/kissed and gave each other best wishes for a great race.  I couldn't hear what was happening at the start line because the announcer sounded like the teacher in the Peanuts cartoon (Wah wah wah, wah wah wah wah).  I didn't hear our national anthem (if they played it at all?) and I didn't hear them announce if there was going to be a moment of silence for the victims of Boston.  I had my own as I stood there and waited for the race to begin.

I seeded myself between the 3:50 pacer and the 3:55 pacer as I wanted to stay just ahead of the 3:55.  Probably the first mistake I made.   I didn't want to be glancing down at my Garmin the whole time and wanted to go by feel so I thought this would be a wise move.  As the kilometres went by, I noticed that he was going out way too fast.  I kept seeing him creep up ahead of me so I naturally thought I was going too slow so I kept picking it up.  I overheard one of his group finally call him out and tell him that he was going out too fast for what his pace should be.  I actually overheard him say that he was averaging 5:24s when he should have been averaging 5:34s and was "banking" time.  I'm not a fan of that approach so I finally decided to let him take off.  This was after 15K.

The aid stations were a gong show in my very humble opinion.  You never knew when they were coming until you saw a whole herd of people cutting you off at the last minute as they discovered that they were right upon us.  Thank goodness I decided to bring my own fuel belt so that I had my own hydration.  Their website did say that there were frequent aid stations -- and there were -- but I never expected that at around the 30-32K mark one of those water stations would have absolutely nothing left to offer.  They ran out of everything.  Seriously??  It's not the volunteers' fault, but I had no water left in my bottles and was hoping to fill up at that aid station.  The day was very warm at this point and I was struggling.  I needed to take a gel but wasn't relishing the thought of taking it without some water with which to wash it down.  I'm glad I decided to finally take it anyway because there wasn't another aid station in sight for at least another 4K.  This was on a stretch that seemed never ending along the Martin Goodman Trail before the turnaround to head home.

The beginning of the route takes you through some beautiful parts of Toronto.  I was born and grew up in Toronto but now live in a suburb so it was great to see parts of the city I haven't seen for a while.  It really is a lovely race, but with the heat of the day and the chaos of cyclists and pedestrians on the trail for the last half of the race, that part of the run was beginning to wear on my fraying nerves.   The fact that I could see my Boston qualifying time slip through my fingers didn't help my frame of mind.

The last 10K is what really did me in.  There wasn't any shade in this section of the race and it was a very sunny, warm day.  If you're from around these parts, you'll know that Mother Nature wasn't very kind to us this winter and spring and we didn't exactly have the time to acclimate to this sudden change in temperature.

I had many negotiations with myself in the last hour of this race.  I consider myself a social runner so running on  my own for this long at this pace was beginning to bring me down.   Having someone to share the pain with almost makes things easier.

With 5K left to go in the race and with the oasis of the aid station at the 37K mark where I stopped to down two glasses of water and fill my bottles back up, I looked at my Garmin and did a mental calculation that I thought would still allow me to come in at 3:55.   I don't think I should rely on my math skills at that stage of a race.  I was close but I don't think I was close enough.

The last 3K were a sufferfest and my heart broke when I passed a woman having CPR performed on her around the 39K mark.   It turned out to be an 18 year old, Emma van Nostrand, from Sydney, Nova Scotia.  She later died at hospital where they discovered she had an undetected heart condition.  So incredibly sad.

I knew there was nothing I could do and there were already four people around working on her and I could hear and see the fire trucks coming.  I carried on but that sight weighed heavily on me.  After a brief stop to stretch out the legs, I convinced myself to keep going and try not to make anymore stops.

I could finally see the 41K marker but that last stretch on Lakeshore before the turn into the finish seemed to take forever.  Maybe because my final Garmin calculated a 42.58K total distance??  I knew the course measured long, but I did my best at cutting the tangents.   Seems like I may need more practice at that.

As evidenced above, my finish time was 4:01:26.  I had a personal best by 20 minutes and I know that is nothing to be sneezed at.  As difficult as this was, I managed to fake some smiles for the camera. 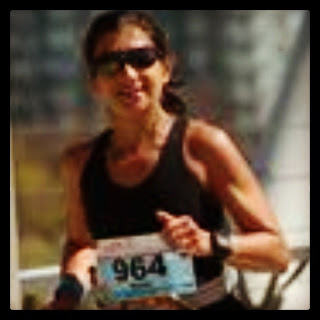 So the question for me now is:  Do I attempt a fall marathon in hopes of qualifying for Boston in 2014?   Our group is contemplating the Presqu'ile Erie Marathon on September 15.  If I qualify, that may give me the last opportunity to squeeze into the 2014 race.  At this point, I'm the only hold out.  I have two friends who have already committed to pacing me to my qualifier.  Everybody else is on board to run either the full or the half.    I will announce my decision in the upcoming weeks.

Here are some fun photos post-run and from the post-race party: 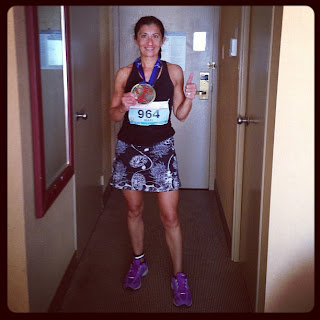