I think it's pretty clear by now that I'm an inconsistent blogger.   My late race report this time around, though, isn't entirely my fault.  I'm totally throwing somebody else under the bus here because I've been waiting for her to upload photos so that I can steal them from her instead of from the official photographer

To be fair to her, she is a little busy training for her first Ironman in Florida which is coming up in just over three weeks.  She might be a touch preoccupied and stressing out just a teensy bit and I know that loading pictures so that I can steal a couple for my blog isn't exactly high on her list of priorities.  I forgive her.  But I'm digressing.

As I've mentioned in earlier posts, this hasn't been my most ideal marathon training session.  I've been dealing with lack of motivation and then injuries so marathon performance was going to be based on how I felt race day.

Saturday morning we made our way down to Erie.  We went straight down to pick up our race kits and were immediately charmed with where we were going to be running.  It was a beautiful drive into Presque Isle Conservation Area.  (Found out while we were there that the Americans pronounce Isle like aisle not eel -- the French way). 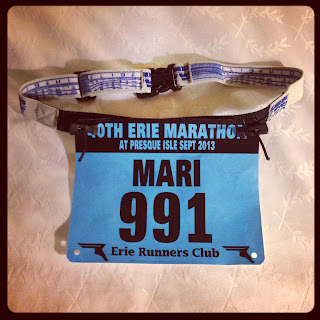 After making a couple of stops for lunch and "snacks," we went to check into our hotel.    We got ready for dinner and then had what is becoming a pre-race ritual "snack."

Soon after we were off to dinner to meet the gang.

Dinner was delicious and we all left soon after so that we could rest up for race day.

I'm not the greatest sleeper at the best of times, and the two days leading up to the marathon were awful.  I woke up on the Sunday feeling pretty rough.  I was exhausted, which didn't help my frame of mind because I was still undecided about how I was going to run this race.  We were required to get into the campgrounds early because there is only one way into and out of the park and it was part of the race route so we were there at 5:30 and the marathon didn't begin until 7:00.  I also felt bad that the hubs and Laura came that early with me because they were doing the half and their race didn't start until 7:30.  That's an awful lot of waiting around.

Seeing that we had so much time on our hands, I curled up in the car and tried to get some more sleep.  It was at this point that I decided I wasn't going to try and BQ.  I honestly wasn't sure whether I even had it in me, but the possibility was always in the back of my mind.

Around 6:30 I went to join the bathroom line up which, of course, was very long.  I was cutting it a little too close for my liking to get to the start line so I ended up doing a brisk warm up to the start line once I was done.  I met up with Janine who had offered way back in May to pace me for this race.   She still agreed to stick by me, even though I warned her I might not be able to hang on to her pace.

After both the Canadian and American national anthems were played (huge Canadian contingent here), we were off.   I surprisingly felt really, really good.  I'm not sure where my energy came from (maybe that little nap in the car?), but I had absolutely no cardio issues on this run.  I'd been concerned about this because this whole training session my cardio has felt off.   Janine and I had decided that we would run a 5:45 pace for the first half and then try and pick it up for the back half if we were still feeling good.

Just a couple of stolen photos with one while we were still running together. 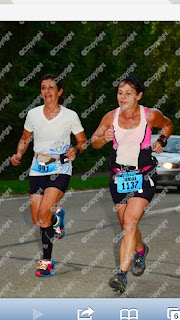 I lost Janine around the 16K mark when I needed to remove the Boston Strong wrist band that I actually wore around my ankle because it's too big for my wrist.  My right ankle/calf had started to bother me and I thought it was because of the band so I removed it and tucked it into my fuel belt.  Turns out that wasn't the case because that pain never really left me for the remainder of the race.  I lost at least a minute or two there because I couldn't quite get my laces to feel right after that and I kept trying to re-do them.  I had told Janine to go on without me and if I could catch up with her I would.  If not, I told her to keep running and have a strong race.  So I carried on, on my own, for what turned out to be the remainder of the run.

This race is a complete double loop of the park so you would be passing the finish line area.  There were tons of spectators there and our own group of well-wishers so it was great to see everyone there.  The volunteers at this race are fabulous and many of the water stops were themed.  One of them was the Hallowe'en gang and they were completely decked out.  I passed them four times.  I don't know how??

Other than losing the minute or so earlier, I was on track at the half-way point to at least make an attempt for my 2015 BQ time (I move up an age group next year).  Soon after the half way point, maybe around the 26K mark, I started to feel my legs falling off the rails.  Part of this route is on concrete which I don't do well on.  I discovered this in 2008 when doing the NYC Marathon.    One of the other reasons, of course, for my falling apart is the lack of tempo and speed work this summer.  My body wasn't used to running that kind of pace for that duration so all I can say is that I was beyond happy that I held on for at least 26K.

The back half of the run was pretty quiet and lonely but the route is beautiful running along Lake Erie.  I was pleased to count only 4 people that were able to pass me on the second half of the run and I definitely passed more than 30.

The remainder of the run was focused on staying positive and continuing to run as strong a race as I could.  The legs were pretty cranky, but I reminded myself how happy I am when I run and that it would all be over soon enough and then I would have a nice long rest before I had to train again for anything of significance.   With 3K left to go, I told myself that I wasn't allowed to have anymore walk breaks.  Somehow, I managed to pick up the pace again and finish it off.

Not what I was aiming for, but I have absolutely no disappointment whatsoever with my finish time of 4:14:47. 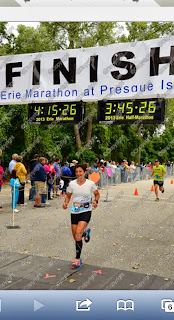 I gave it everything I had and my legs felt like crap when I was done.  The first thing I did when I got back to the hotel room was ice my legs, my feet and did lots of stretching.   I'm not sure if it was because of that (or perhaps all the wine at dinner), but I have never had a faster recovery after a marathon as I did after this race.  I had only a little trouble with stairs.  I didn't need to do the two feet on one stair when going down and I didn't need to hang onto every imaginable surface to sit on a toilet.  I.am.grateful!

I am happy to report that everybody who did this race had a fantastic time.  Lots of PB's were accomplished and everyone wants to come back next year.  It is so well-organized and they love how many Canadians come down.  They also have a high percentage of people who qualify for Boston every year.  From their website:

I would highly recommend this race to anyone looking to qualify. 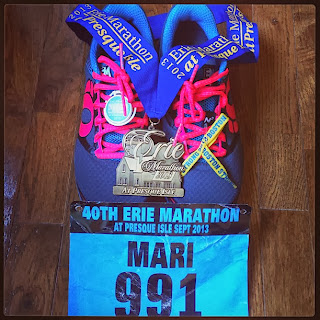