I love NYC!  I think I've said that before, but it's so much fun when you go with a bunch of gal pals and shop till you drop and then throw in a half marathon just for fun.   I don't know how New Yorkers do it, but this past weekend saddled them with a double whammy:  St. Patrick's Day Parade on Saturday and then the Half Marathon on Sunday.  Lots of road closures and lots of congestion.  Lots of fun for us, though.  Lots of drunken fools at 9:30 a.m. the day of the parade and it hadn't even started yet!  Everyone's Irish for a day on the 17th.

So...race report.  Sunday morning started off a touch cooler than predicted.  According to the weather report before leaving home Friday, it was supposed to be 17-19C and sunny.  Actual race day weather, at 7:30 in the morning, was more like 5-7C and cloudy.    Not bad, but I'm glad I brought a fleece throw-away.  I took it off at 7:30, but since we still hadn't moved for 15 minutes, I put it back on.

Last year it only took us about 10 minutes before we got to the start line.  This year, the elites passed us before we hit the start pad!  That meant they were done 10K before we even started.  Just an FYI that the guy who won the race finished in 59:49 -- holy Speedy Gonzales!

The course was slightly different this year.  They reversed the direction in Central Park and we only did one full loop instead of one and a bit.  They cut out the loop up along the Hudson River to add the extra distance, but we went further down along the River and passed the partly built Freedom Tower where the Twin Towers used to be.  Very cool!

We finished in Tribeca in Fulton Market.  It's pretty crowded at the finish line, but that's what happens when you have 18,000 runners.

This race is so well supported and there's tons of entertainment along the way.  The ladies have decided that this is going to become an annual event -- providing we get into the lottery again.  We're keeping our fingers crossed.  If we don't get in, we'll just go down and shop anyway.  Speaking of shopping, here's one of my purchases that I just love: 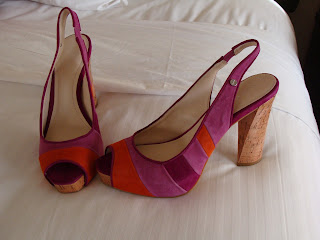 No, I didn't wear them after the race.  I don't think my feet would fit in them.﻿
This weekend is the Around the Bay Race.  This is my target running race this spring.  I hope to PB here which would mean sub 3:07, but I'm secretly hoping to be sub 3:00.   Yikes!  I've put it out there so now the pressure's on to follow through.

Hope everyone who is doing the Bay has a fabulous race!

"Strength does not come from physical capacity; it comes from an indomitable will."  Gandhi
Posted by Mari at 10:53