Last Christmas we gave my oldest nephew a race registration as a gift.  He could pick whatever 5K or 10K race he wanted and he could hang out and run with his very cool aunt and uncle -- that would be me and the hubs, just in case there was any doubt.

He loved the gift, thank goodness, and he would finally get to experience some of the adventures that we constantly (ad nauseam?) talk about at family gatherings.  He's a hockey player and has been since he was a kid so I know he's a strong athlete and he would probably kick my a$$ on the run.

I'd never done this race before, but I was there last year when a bunch of my friends did it and they all enjoyed it.  When they mentioned doing it again, I was on board and suggested to my nephew it would be a good race to do.  It worked with his schedule and I got us registered.

He'd given me a couple of training updates in the weeks leading up to the race.  Things like, "I did a 5.1K in 24 minutes and I had lots left in the tank."   Of course you did, you 22-year-old aerobic engine, but have you done 10K before in the heat and humidity?  Damn whipper-snappers!

Race day arrives and it happens to be a very hot and humid day and they're calling for thunderstorms.  Just perfect!  So I get this text from my nephew: 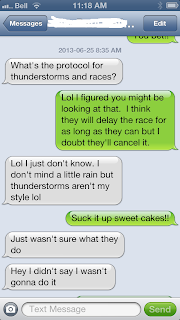 I'm not thrilled with running in that kind of heat either and my left hamstring has been giving me grief for a couple of weeks.  The plan was to go as hard as I could but keeping in mind I didn't want to jeopardize my marathon training for a 10K this early in the season.  My nephew's goal was to do it in around 50 minutes or just do the whole thing without stopping.   Based on how I've been feeling lately, I knew 50 minutes was out of the question for me and I told him so.  We were going to start together and assess from there.

I wasn't feeling great during the day and fueling for a 7:30 p.m. race is a bit tricky and something I hadn't done before.  Maybe the extra-large lunch didn't help my feeling of discomfort.  Blech!

We get to the race site and race kit pick up is a breeze.  Race tech shirts were really, really cute (white for the ladies) and very masculine for the guys in a dark forest green.

Thankfully, the evening clouded over and the threat of thunderstorms subsided.   It was slightly cooler and windier in Grimsby.  We had about an hour to kill so we got ourselves organized and we each did our warm ups.  I can tell by my warm up that the race may not go as well as I would like.  My nephew, on the other hand, is raring to go.


The 5K race went before us so he got a kick out of watching them all take off.   We're now lined up and ready to go.  We decide that we'll go out a bit slower so that we can save some kick for the end.  I remember waiting for the gun to go off and thinking that I didn't want to be the 101st person to cross the finish line.   This race has a graduated medal system.  The first 100 get gold medals, the second 100 get silver, and everyone else gets bronze.  In retrospect, I should have mentioned this to my nephew.

The first 2K in and I see we're averaging 5:15 paces and I know that I haven't got it in me to hold on to that pace for the whole thing.  Just before the 3K marker, I told my nephew to go ahead and I'd see him at the finish.   And just like that he was off like a slapshot <-- probably the only hockey metaphor I'll ever use.

This race has a few rollers but nothing too difficult.  It's actually a really pretty route.  There's an overpass and a slightly steeper hill before the 6K mark that are of any significance.  I felt like I'd been pushing the pace and I wasn't sure whether there were anymore hills after this so I took a really short walk on the steeper of the hills so I could re-group and then took off again.   The rest of the race was flat but slightly into the wind.

There were tons of volunteers and aid stations and even the firefighters came out and opened up one of their hoses (TWSS :-p) to cool us off.

I'd been playing rabbit with this older gentleman for at least 6K of this run but around the 7K mark, I decided that I needed to pick up the pace.   I knew for sure that the route would be flat from here and I wondered (in vain apparently) if I could catch my nephew.  That was definitely not happening, but I must have picked off at least 20 people in the last 2K of the race.   I found out later that the older gentleman was in the 70+ category and came in only 45 seconds behind me.  I want to be that fast when I grow up. 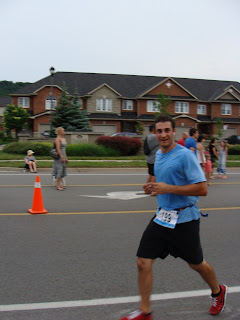 That makes me one pretty damn proud aunt, I can tell you.  He was pretty happy -- and hooked!   We went inside the arena to check race results.  That's where I discovered I came in 3rd in my age group....... 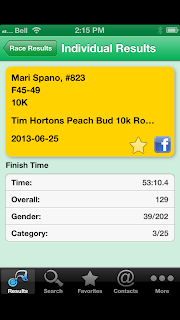 ....and my nephew discovered he came in 101st.  Hmmm, he was not happy.  But since he caught the racing bug and won't meander his way into the finish line again, he's decided to do another race and is doing the Downtown Dash.  I gently told him that he needs to assume that the person in front of him is in the same age group and he needs to kick it all the way into the finish.  He won't make that mistake again.

Just as an aside, the woman who won the masters was in my age group so I got bumped up to second.  I stuck around for the awards because I knew they were giving out medals.  If I had known it was going to be the exact duplicate of what I got for finishing, I'm not sure I would have waited the extra half hour it took for them to present the awards.  What?  It was 9:30 and I hadn't had dinner yet.  Yes, I could have eaten the hot food that was at the finish, but I wanted my pizza and beer. 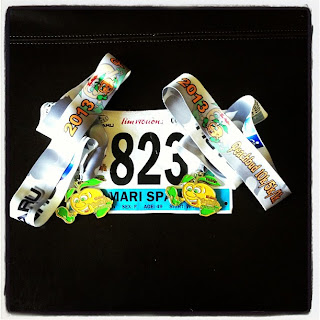