The Mind is Ready

But the body is not.

After a couple of months of being unenthused about training for my next marathon, I'm beginning to get that excited feeling of training again.  Unfortunately, my body isn't exactly on the same page as my mind.  I've been struggling with some nagging pains -- I won't say injuries -- in my left hamstring, hip flexor and my left arm.  The arm has since resolved itself with some rest.

I was ready to start pushing those running paces again, but I decided it would be wise to lay off on any speed and tempo runs for a couple of weeks.   Things were beginning to feel a little better, so I went for a semi-speed session last week after my self-imposed rest just to try out the legs.  Well, I was one hurting unit after that attempt.   So without further procrastination, I made an appointment to see my ART guy, aka Dr. Pain.  After two visits, the hamstring is much better.  The hip flexor is going to take some work, but he hasn't said I can't run.

He even encouraged trail running.  Good thing because we went up to Paris for the Run for the Toad training run this past weekend.   I expected some hard climbs, but there was a continuous stream of non-stop hills right from the start. Tough day but amazing fun.  It was a really well-organized event and a great course with some awesome views.  I was signed up to do the two loops of 12.5K but the downhills were beginning to aggravate the hip flexor so I only did part of the second loop and called it a day at 16.5.  16.5K of tough trail running is equivalent to the 30K road running I was supposed to do for the weekend, right?


The gang that came out for the Run for the Toad practice run: 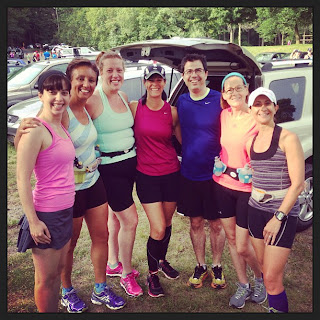 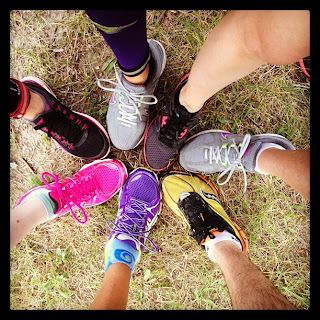 So after a couple of ART visits and some very intimate time with my foam roller and little blue ball being massaged into my hip flexor, I will go for a tempo run tomorrow and hope that there's no residual pain.

I am eager to train hard again and I only have six-and-a-half weeks before my marathon.  I've had to think hard about my goals for September's marathon and this setback may dictate what I do.  I've been pondering dropping down to the half marathon, but I haven't made a firm decision yet.  I have some long runs coming up and the Midsummer Night's 30K mid-August.   How I decide to run the Erie Marathon may be a race-day decision.

All I know is that I'm happy to have the fire in my belly again.  While I'd like to say that it doesn't matter to me if I decide I can't go for my BQ in September, the reality is that that isn't entirely true.  It would be the icing on the cake and a validation that I only seek for myself.  But in the end, what does really matter to me is the fact that I have the ability to run and that the exhilaration of running has returned.  All it took was a little irritation in my body to remind me how very lucky I am that I get to run.